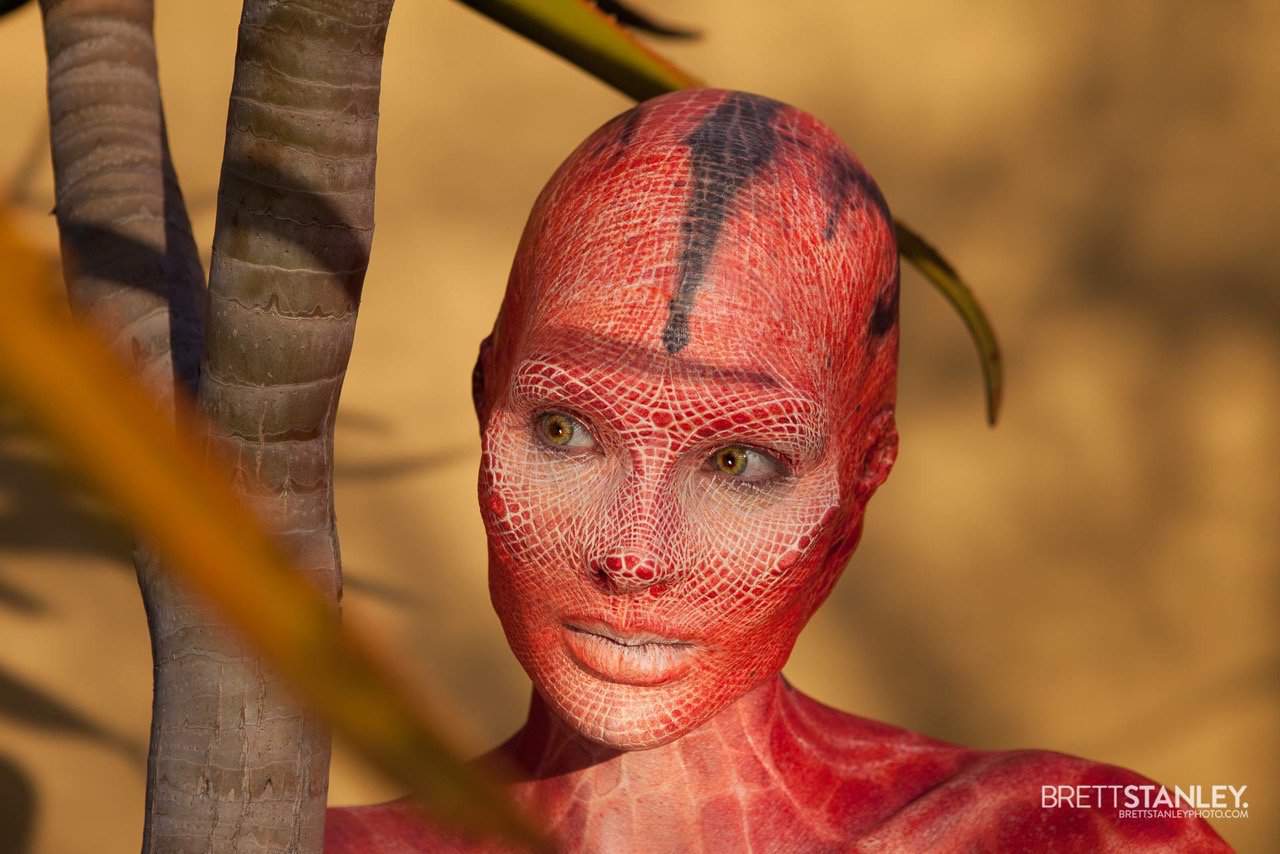 This post is going to be a little different than most I’ve created on The Makeup Refinery so far.

Yep, for the first time, I’ll actually be sharing some makeup applications that I’ve done over the years.

Makeups that I have applied all using the wonderful foam latex appliances from RBFX.

If you’re not familiar, RBFX is a company that is the brainchild of former Hollywood Makeup FX heavyweight, my friend, Roland.

Roland is something of a legend in the field.

He has worked for makeup effects legends such as Rob Bottin, Greg Cannom, and Rick Baker. That’s basically the makeup effects trifecta of the 80s and 90s.

Roland’s knowledge and experience supervising foam rooms on massive makeup-heavy shows in Hollywood led to him stepping sideways and forming his own company to provide options for makeup artists that require prosthetic appliances for projects last minute, or without the standard procedure or lifecasting, and custom building for a performer. This seems to be the case more and more these days…

On a whim, I decided to chat with him last week, because, well it IS Halloween after all! And he’s your man for all makeups Halloween calls for!

Okay here’s what the man behind RBFX had to say to me about his incredible company!

What was your introduction to makeup and makeup effects?

It started with Halloween as a child.

As a kid, did you know that this would be something you would pursue as a career? Or that was even a possibility?

I had no idea it was a career when I was a child. Yet as a young adult I knew it was something I would like to do.

So, how did your film/tv career begin?

My film career started with going to a makeup school (which is no longer around).

I assisted on a few projects (with no pay) at Makeup Effects Lab & independent college projects before I got my first professional job in 1988.

You were so prolific in what I like to look at as makeup effect’s heyday. I know you’ve worked on some incredible makeup effects-famous movies in your career. What has been your most memorable/favorite job experience?

It’s hard to pick just one but I’d say in all, would have to be during the 1990s working on Total Recall at Rob Bottin’s.

There were so many fantastic makeups and animatronics developed all before CGI existed. It was also my first time on set and I worked crazy hours.

Another would have to be working at Greg Cannom’s on Bram Stoker’s Dracula.

Overall, it was a small crew creating some iconic characters in a relatively short amount of time.

Both of these films won Academy Awards.

Amazing. Legendary work in both, quite different projects.

What have been some of the biggest challenges or hurdles you’ve had to face on projects? Deadlines, challenging builds, or locations?

I’d say the biggest challenge I faced in makeup effects work was working on How the Grinch Stole Christmas.

At that time I had a crew of eleven people consisting of a day & night crew.

As a crew, we cast over 64,000 prosthetics for many, many different characters.

Also at the time, I had a newborn at home. Exhaustion was an understatement.

RBFX is so omnipresent now, it feels like it’s always been around.

How did the idea of creating high-quality off-the-shelf appliances come to you? Was it difficult to walk away from, being such a prolific foam room supervisor with an impeccable resume behind you?

Over my years of casting prosthetics, people knew they could ask me where they could find a certain makeup look or style of work (via makeup FX shops – since I worked for fx shops I made castings for over the years).

I came to the point where I said to myself I could do it, so why don’t I just give it a shot?

Definitely a risk, but one worth trying.

In the first year, we created about 64 designs to sell.

And now at almost 10 years in we are at 1010 product pages to choose from.

By working with my Distributor Motion Picture FX Company we are known and used worldwide.

Thanks! Walking away from working in-house in other shops was a natural process.

After the recession in 2008, I was only employed 4 months out of that year, so I knew I’d have to do it for myself, and not wait for others.

So in 2008, I created RBFX Studio to cast prosthetics for a variety of different FX shops, large & small.

Then in 2013, I created RBFX Prosthetics which turned the tide on my business – which now reaches hundreds of makeup artists and production companies every year from all over the world.

That’s incredible! Such a great success story of making our industry work for you.

Do you miss the days of Rick Baker’s shop and those massive makeup effects-heavy productions that really don’t exist anymore?

Sure, I miss the old days, but what miss the most from it are the people.

Over the years I have worked with amazing artists & FX technicians who have both taught and touched my life.

Many I call friends today.

Awe. I hope you cross paths professionally, as well as personally to this day. Where do you see things moving in the future for you? Have you embraced 3d printing, scanning, and the newest techniques and materials that seem to be massive labor-saving devices? Are these tools and equipment types applicable to your business?

We still all work old school style, but we work with the best mold & casting materials available.

Our timelines are different from that of other FX shops, so deadlines are not such an issue.

That said, I can see bits of 3D printing in the future for a few designs.

Oh, fantastic. And what would you say is your most popular appliance?

I’d say zombies and aliens are our top sellers.

Interesting. I’d love to ask – how do you decide on sculptors and the design that they are sculpting? Do you give them a brief of an idea you have in mind, or is it left up to them what they would like to create?

Over the years I’ve known many sculptors, but I have also brought in many that I have never met before in person, only on social media. (Including Savannah Koningen who I know you have already interviewed. Check her out here!)

I usually reach out to them to see if they have any interest. If they are into it, then their first design is all about fun.

I like to have them do a design that excites them. I ask for updates along the way and give input to make sure it could work as a generic piece along with some guidelines.

Oh, that’s great! I know you’ve dipped back into production work from time to time to assist with running pieces when Makeup FX shops get slammed – how does this slot into the day-to-day runnings of your business? I can imagine it gets pretty hectic at times.

Yes, I help other shops from time to time but I have referred most of that work to my friends Bill Fesh & Tim Phoenix who have now opened their own casting company (they have worked for years for me in the past, so I’m happy to send the work their way).

It’s exhausting taking on other FX work along with the catalog work.

I once closed the catalog down to complete one FX job, and I will not do that again.

But I will pick and choose parts of an FX job so that it could work in tandem with my company’s work.

Okay last question – if you could only pick one makeup or effect to be your favorite what would that be and why?

Well, I would have to say the makeup of John Merrick on John Hurt for the movie “The Elephant Man”. Although, I feel that makeup brought so much to the film, showing the inhumanity and humanity of mankind. I could ramble off a dozen of other makeups that I feel that strongly about.

Thanks so much, Roland!

Check out the entire catalog of the RBFX range right here.

You can also find his catalog here on Instagram. And, if you’re looking for some creative inspiration, check out his RBFX Makeup Gallery, dedicated solely to the makeup applications that artists around the world create using his appliances. Such a cool page!