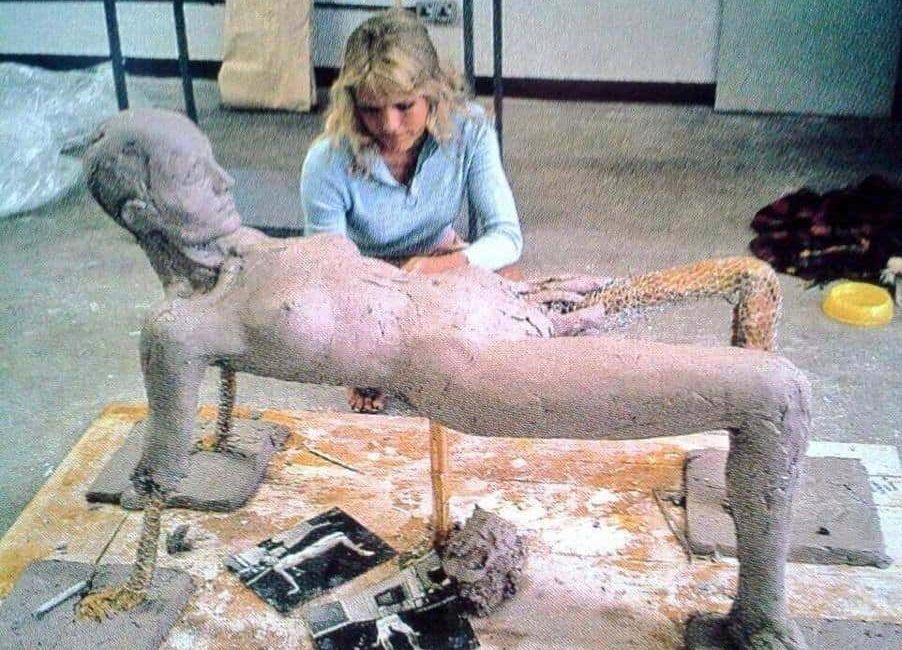 Liz Moore may not be a household name. But she has certainly created some of the most iconic and memorable characters and art from movies of modern time.

I have always loved movies. For as long as I can remember. Even when I was very young, movies captivated me. Growing up and developing my own career within the business, I can assume it’s only natural to begin studying and learning more about the artists behind the movies and characters I loved.

One such individual I happened across over a decade ago is a brilliant and still relatively unheard of English sculptor Liz Moore.

Liz was involved in the creation of some of the most iconic pieces of movie art of the last 50 years. It compels me that her name is not more widely known. Particularly given her movie credits, and what she produced for those movies. Hopefully we can help spread the word and share the love for the iconic works of Liz Moore!

Born in Ashstead, Surrey. Liz attended the Kingston Art School from a very young age; just 16 years old. And in that same year, paintings of hers were utilised in the feature film “The World of Suzie Wong”.

Clearly, her natural artistic abilities were evident to both peers and instructors alike; and in particular her work as a sculptor.

A few years later, she moved onto a National Diploma of Design course in Fine Arts, and including sculpture. In 1965 her work was included at The Royal Academy of Art for the National Diploma Show.

Liz gained a certain amount of attention and notoriety over her portrait busts of The Beatles that she produced in the late 1960’s.

It was around this time that she landed her first full-time film work on Stanley Kubrick’s 2001: A Space Odyssey. Liz was responsible for sculpting the ethereal Starchild that has become synonymous with the film, even some 50 years after its release.

She appears below working on a facial piece for the Dawn of Man sequence in 2001, no doubt with Stuart Freeborn and his crew.

Roughly two years later, she worked on Kubrick’s next project A Clockwork Orange. Kubrick had spotted artworks by the controversial artist Allen Jones.

He was inspired to create similar female-formed furniture for the Korova Bar set of A Clockwork Orange. The bar would serve as the meeting place that the central character of Alex and his ‘droogs’ frequented in the film.

When Jones declined Kubrick’s offer for no pay, but with a film credit, it appears that Liz got the job. She sculpted the now-iconic figures that we instantly recognize and associate with the movie.

John Barry (Production Designer on A Clockwork Orange) had asked Liz to come and work on the upcoming (and little known at the time) space opera known as Star Wars: A New Hope.

By this time it was 1976. And for Star Wars, Liz sculpted various prototypes for the character C3PO, and eventually the final approved suit that would be what we would come to recognize as C3PO.

Liz worked alongside prolific English sculptor Brian Muir. Brian himself sculpted the iconic Darth Vader helmet. And together, they worked on the looks of the stormtrooper helmets that are now synonymous with the mammoth Star Wars franchise.

Stanley Kubrick, years after the release of A Clockwork Orange would call Liz personally to invite her to work on his next project Barry Lyndon. But tragically this would never come to fruition. Her life was cut tragically short by a car accident in Holland. Liz died at the age of 32.

I hope you enjoy these images of Liz and her work.

Please check out her Facebook page dedicated to Liz and her legacy, created by Brian and Lindsay Muir.

I see her as something of an inspiration and female trailblazer at a time when this industry was very much a man’s world. And you can really feel the sense from the photos that she must’ve been a sassy young woman. She was an iconic sculptor without doubt. Thank you Liz! We salute you!

Brian Muir’s “In the Shadow of Vader“